Our vision is to ensure the future of the Hoh Tribe as a strong, sovereign Nation by continuing to preserve and instill our inherent cultural and spiritual traditions and values. We will continue to protect and enhance our natural resources by exercising our Treaty Rights. We will achieve this through effective governance and stewardship recognizing the need to provide for the health, education, and welfare of our people.

The Hoh River Indians are considered a band of the Quileutes but are recognized as a separate tribe. The Hoh Indian Reservation was established by an Executive Order in 1893. The Hoh Reservation consists of 443 acres located 28 miles south of Forks, and 80 miles north of Aberdeen. The Hoh Reservation has approximately one mile of beach front running east from the mouth of the Hoh River, and south to Ruby Beach.

The Hoh Tribe has formed a Tribal Government under Public Law 89-655, providing for a basic roll of tribal members. The Governing body is elected by secret ballot biannually in November.

The Hoh Reservation was logged in 1954 and it will be 40-60 years before the second growth will be of commercial value. None of this land has been allotted. The livelihood of the Hoh Indians is primarily fishing although a few of the residents make traditional decorative baskets, carved canoes for ocean going or river use and other decorative carvings. The local people dip for smelts on the beaches and still use smokehouses for preserving food for future use. The tidelands are abundant with razor clams, butter clams, crab and perch fishing. 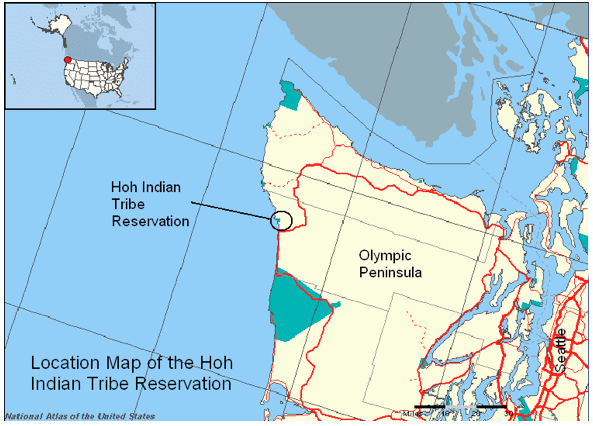 Origin of the Hoh Tribe

The Hoh River (chalak’At’sit, meaning “the southern river”). The river itself is focal in Hoh tribal identity and folk-history and in traditional economic patterns.

The Hoh people were created along the river. Mythic narratives called kixI’ recall the origin of Those-Who-Live-on-the-Hoh (Chalat’, as the Hoh call themselves). According to these accounts, the ancestors of the tribe were “created by transformation” at the Time of Beginnings by K’wati the shape-shifting “Changer” who went around the world making things as they are today.

When K’wati got to the Hoh River he discovered that the inhabitants of the area were upside down people, who walked on their hands and handled their smelt dipnets clumsily with their feet. They weren’t very good at it, so they were famished and skinny. K’wati set them rightside up and showed them how to operate their nets with their hands. For that reason, Hoh elders still sometimes refer to themselves as p’ip’isodat’sili, which means “Upside down people”. After he had set the Hoh upright, then, the Transformer told the Ancestors, You shall use your feet to walk… Go and fish smelt. You shall catch much fish when you fish smelt.” Ever since then there is much smelt at Hoh. (Andrade, p. 85)

So important is the river in tribal lifeways that there is also, not surprisingly, a mythic narrative for the origin of the river. The Hoh River and the headlands along the beaches (Toleak Point and Hoh Head) were created by K’wati, as well. According to the story, K’wati killed the chief of the wolves, and then tried to escape from the other wolves, who were bent on revenge. The wily Transformer had grabbed his carved comb and a container of oil when he fled from his house, even though the wolves were in hot pursuit. According to the story, Then K’wati ran down the beach. Then the wolves followed K’wati intending to kill him. As soon as the wolves were about to overtake K’wati, he used what had been hanging in the house [i.e. the comb] and struck the ground with it on the beach. No sooner had K’wati finished striking the ground on the beach with his comb and there appeared a cliff. Of course, the wolves had to swim around the cliff. Then the wolves would be left far behind. Once more the wolves were about to overtake K’wati and he spilled on the ground what he was carrying [i.e. the oil], there appeared a river. Of course the wolves had to swim across the water. Then K’wati kept on going and as soon as they would be about to overtake him, he would … make cliffs and rivers. So, he went around the country and K’wati was never overtaken by the pursuing wolves. Ever since that time there are cliffs and rivers. [Andrade, p. 97-9]