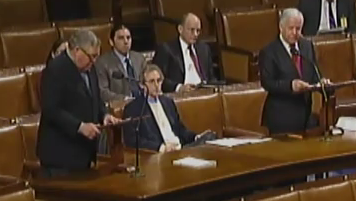 Chairman Rahall, Ranking Member Hastings, other Members of the Committee, I am Walter Ward, Chairman of the Hoh Indian Tribe located in Washington State on the Olympic Peninsula. It is a great honor for me to testify before you on behalf of my people and in support of this bill. I would also like to introduce Dawn Gomez and Ernie Penn, Council Members from the Hoh Indian Tribe, who are here with me today.

I would like to begin by thanking our long-time friend, Congressman Norm Dicks, for introducing H.R. 1061, the “Hoh Indian Tribe Safe Homelands Act.” Not only are the Hoh people fortunate to have Congressman Dicks as our Representative from the Great State of Washington but Indian County is also fortunate to have him working on its behalf. He is one of Indian County’s true champions with all that he does to address the dire needs in Indian Country, such as in the areas of health care, education, law and order, resources, and the list goes on and on. Time and time again, he has demonstrated his commitment to us and to all of Indian Country.

We also thank Senators Patty Murray and Maria Cantwell for introducing S. 443, which is the companion bill to H.R. 1061, and for their friendship to the Hoh people and their tremendous efforts on our behalf.

For as long as anyone can remember, the Hoh people have lived near the mouth of the Hoh River where it flows into the Pacific Ocean. The Blue Glacier and other smaller glaciers on Mount Olympus in the Olympic National Park feed the Hoh River. Our traditional history teaches us that “the Upside Down People,” as we call ourselves, were created here and blessed with plentiful smelt in the waters to fish. We also traveled inland into the coast range of the Olympic Mountains and by canoe in the Pacific Ocean north into Canada and south to Quinault.

Our lives were changed, however, when the 1856 Quinault Treaty preserved our rights to fish, hunt, and gather roots and berries in parts of our ancestral territory but greatly diminished our land base. In 1893, 37 years after the Quinault Treaty was signed, President Grover Cleveland set aside 640 acres of land, one square mile, bordered by the Hoh River and the Pacific Ocean. This is our current homeland, the Hoh Indian Reservation. We are still living along the Ocean and the Hoh River, but we cannot move upland like we once could.

The Hoh Indian Reservation is located 30 miles south of the town of Forks, Washington, where the closest grocery store is located. While we are rich in culture, our 230 tribal members face serious educational, health care, and housing challenges. Although our tribal education

Programs are making a positive difference for our people, about half of our tribal members who are 25 years or older have not received a high school diploma or GED. It takes an ambulance about 45 minutes to respond to a call at our remote location, and about 45 minutes to get the patient to the hospital in Forks. Jobs are scarce, so about 70% of the 130 tribal members who reside on the Reservation are unemployed. We are blessed with many children and grandchildren, 60% of our population is under 18 years of age, but our baby boom makes housing and child care an issue for Hoh families.

The waters that provide for us also pose the threat of danger from floods and tsunamis to our people and our lands. The Ocean and the River have slowly claimed our lands through erosion and changes in tide and river course. In fact, the 640 acres of the original Reservation land base now includes only 443 acres of dry land, more than a 30% decrease. The exact causes of this encroachment are not clear, but we believe that climate change is impacting us. The glaciers on Mount Olympus are melting and feeding more water to the River than we have seen in the past. Also, the Army Corps of Engineers stopped dredging the River years ago, so that may be a contributing cause as well.

90% of the Hoh Reservation is now located within a 100 year flood plain, and 100% is located within a tsunami zone. Winter and spring floods now regularly impact Reservation homes, government facilities, and utility structures. Flooding restricts further development and causes ongoing problems with existing structures. In addition to the flooding danger, all of the Reservation facilities and homes are at or below 40 feet elevation and within inundation zones if a major tsunami were to strike.

In 2006, we purchased and filled 6,000 sand bags to protect homes and tribal buildings. Inmates from the Olympic Correctional Center helped our community members in making and placing the sand bags, which we greatly appreciate. Unfortunately, flooding still destroyed or severely damaged many buildings, our waste water treatment system, and other utility structures, causing critical environmental and safety hazards. Sand bags now create a permanent grass- covered berm around our Tribal Center that FEMA tells us is a health hazard.

We have turned to federal agencies such as the BIA, HUD, and FEMA for assistance, but these agencies are limited in what they can do to help because of the dangerous and unsustainable location of the Reservation.

A recent survey indicates that there are less than 73 acres of lands within the 443 acres of dry land of the Reservation that may be suitable for building. Flood plain, wetlands, buffers, slopes, and cultural exclusion areas all impact the land area available for the future needs of the Tribe. Most of the 73 acres is in areas that are at the extreme southern edge of the Reservation and not practical for development due to ocean cliffs, potential erosion, wetlands, and protected habitat. There are 11 acres of land that have been surveyed for development of housing above the flood plain, but this land is still within the area of danger from tsunami, prohibiting HUD from providing us funding to build in this area. Of the 30 homes located on the Reservation, many of them are in serious disrepair and approximately 20 of them have two or more families living in them. No new home has been built on the Reservation in 20 years. There is an immediate need to build 20 to 30 homes and growth projections are for at least 60 additional homes within 40 years.

We do not come to this Committee without having taken significant steps to help ourselves. Over the past year and a half, we have purchased a few parcels of land near the Reservation to the East, upland from the Ocean that H.R. 1061 would place into trust. The “HOH INDIAN TRIBE SAFE HOMELANDS ACT LAND ACQUISITION MAP DATED May 14, 2009” shows the parcels we own that would be placed into trust under H.R. 1061. The parcels are: approximately 195 acres from the Fletcher Tree Farm, approximately 67 acres from Rayonier Timber, and approximately 12 acres of a right of way from Union Pacific Railroad.1 All of these parcels are free of liens or encumbrances and there are no mortgages or any sums owing. In other words, the Tribe owns these parcels “free and clear.” We do not have gaming on our Reservation because of its remote location, so the decision to purchase these lands demonstrates our commitment to move our people to a safer area.

Also providing enormous support to this effort, the Washington State Legislature and Governor Gregoire authorized the transfer of a 160-acre parcel of State Department of Natural Resources land to the Hoh Tribe. This land is a short distance and upland from our current Reservation.

1 The right of way that the Hoh Tribe purchased from Union Pacific Railroad is a total of 27 acres but H.R. 1061 and S. 443 would only place 12 of the 27 acres found within the boundaries of the land that it purchased from Rayonier Timber into trust. H.R. 1061 and S. 443 would not place the remaining 15 acres of the right of way from Union Pacific into trust.

This bill would direct the Secretary of the Interior to take the lands purchased by the Tribe, the lands transferred to the Tribe by the State, and the National Park Service lands into trust for the Hoh Tribe, adding a contiguous, upland area to the Hoh Reservation. It would prohibit gaming on the lands taken into trust through this legislation.

We thank you for the opportunity to offer this testimony. This legislation represents new hope for the Hoh people, and we look forward to working with you on its passage.